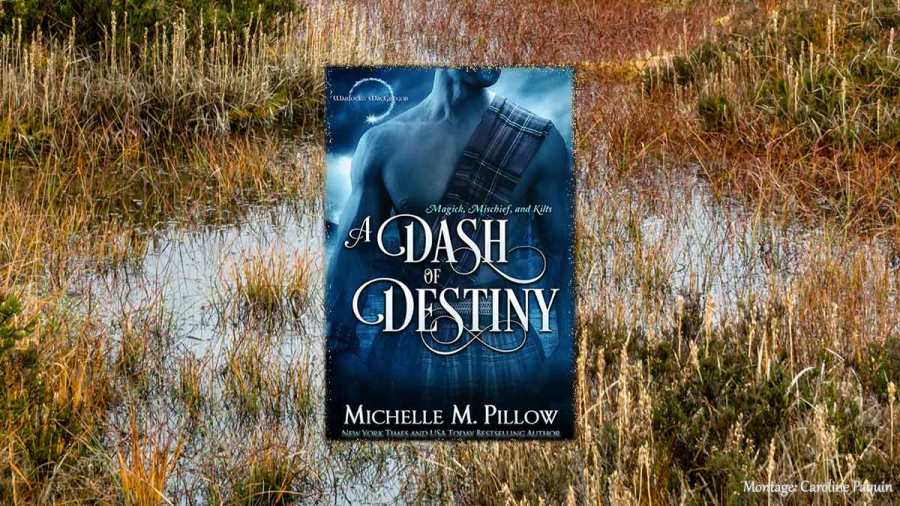 A new book arriving on my Kindle in the morning, when I wake up, is always reason to be happy and excited. If this new book is a Warlocks MacGregor, it is even more cause to celebrate. This Tuesday, it was Rory’s story, A Dash of Destiny, which had arrived on my Kindle just before I woke up.

Needless to say that I jumped into it the moment I left for work.

What I didn’t expect is that I would finish it within the day. After all, I did teach all day and I had a lot of things to do and take care of. But I just could not resist the pull of those Scottish Warlocks, more so when the book’s main character, this time, was my favourite of the MacGregor men.

That’s probably why I read it in (literally) one go and was reading a chapter as soon as I had a free moment, then finished the last two thirds of it the moment I returned home from work.

I expected the laughs (and there were very many of them, sometimes until my stomach hurt). I expected the fright and the action. However, what I did not expect was to finish the book in tears. Not because the book was sad, but because I was sad. Sad that it was over. Emotional that my favourite had the story that befit him and shone very bright. It took me a while to get over it. I was an emotional mess.

A Dash of Destiny is the eighth of the Warlocks MacGregor series. After focusing on Erik (Love Potions, which is still currently free if you want to see what the love is all about), Iain (Spellbound), Fergus (Stirring Up Trouble), Malina (Cauldrons & Confessions), Niall (Spirits & Spells), Euann (Kisses & Curses), and Kenneth (Magick & Mischief), it is now Rory’s turn to be in the spotlight… when he was not in the mud!

Because like in all the MacGregor books, there is a threat after the “young” Warlock (hey, he might be a little immature, but he is still several hundred years old, ergo the quotes). This time, the threat comes in the form of mysterious disappearances and loss of memory, a lovely waitress who seems to want to skin him alive (when she doesn’t want to jump his bones), and a mysterious bog from his past, which Rory is trying to remember.

All the ingredients combine to make of the book a compelling story, full of magick, love, desire, and action.

The best of the series

I am biased. I was waiting for Rory’s story with impatience, hoping that his story would befit his character. If that is not pressure to be put on a single read, I don’t know what is.

I was not disappointed.

There was a layer to Rory which we couldn’t know until Michelle M. Pillow delved into his mind, which she did with great detail (and to my wanting to hug him even more). Yes, like all the MacGregors, he is and will remain completely full of mischief (as stated with the whole passage devoted to the various pranks that he pulled on his cousins and uncles, much to our hilarity), but there is also a wistful side of him which I discovered in this book. This last part is what made me love him even more than I already did.

It also helps that Jennifer is a woman very worthy of him. Independent to a fault and resourceful, she also has a dark past, which ended up leading her to Green Vallis in need of a job, into the clutches of something dark, and in Rory’s arms.

Add to that the whole of the MacGregor clan that we know about, with a more unhinged than ever Raibeart (yay!), getting to know Rory’s siblings, his sister, Maura, and his twin brother, Bruce, and a cute little puppy, and all the ingredients were there for quite an adventure.

For me, seeing Rory shine so bright was the best treat I could think of. Michelle M. Pillow did justice to this more complex than we thought character, and simply made me love this family of Warlocks even more. Their love for each other was in every page, despite the sometimes clumsy way in which they show it.

And there’s Uncle Raibeart, of course! Lots and lots of Uncle Raibeart, including his hacking skills (which had me crying with laughter because I remembered some of it happening), and a particularly hilarious fashion disaster, to name only this.

Michelle admits that she loves writing this series, and it really shows in the laughs and the love!

Rory shone bright in his story, as he deserves, and this eighth book was full of all the ingredients which has made the success of the series since the first one. For one, I never thought I could love him more than I already did. But I also love the MacGregors even more. And I do. It was a wonderful, wonderful read from start to finish. I am now looking forward to Night Magick, Maura’s story, which will come out next year.