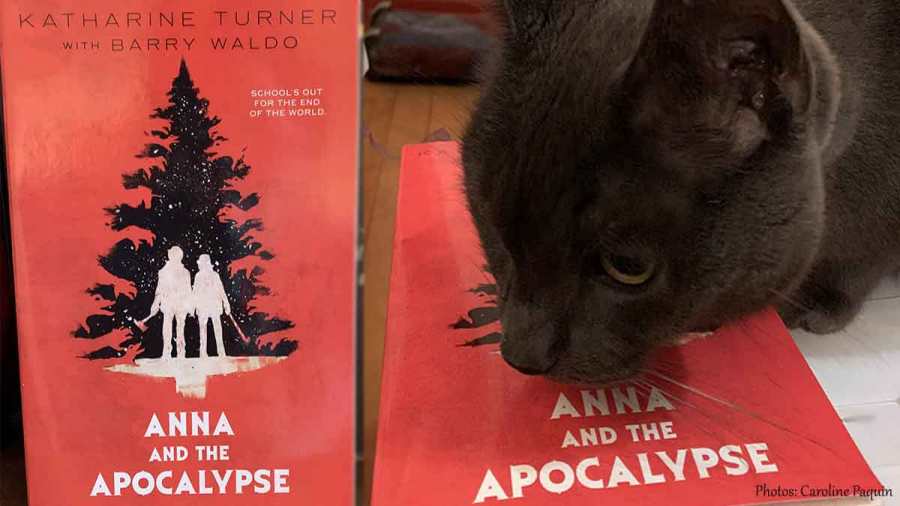 Happy Halloween, readers! I don’t know about you, but I like to read one or a few books related to a holiday when its time nears. Although I admit that this year is a little different, since I haven’t read anything Halloween related due to lack of time. Then again, shifters count, do they?

That being said, since I am not a horror books fanatic, I still owe this one a review. After all, despite its action taking place just before the Christmas holidays, it is about zombies, and a mighty good book at that! Considering that I am not a YA reader, this is pretty telling in itself.

In fact, I read Anna and the Apocalypse last year… on Christmas time! But it is so perfect for Halloween that I couldn’t resist talking about it now. It also helps that one of the authors, Barry Waldo, is a Twitter pal. Else I admit that I would never have looked for that book, or bought it, let alone read it. And I seriously don’t regret it one bit!

I think that the book’s blurb is, in this case, better than anything I can think of to summarise it:

School’s out for the end of the world.

Anna and the Apocalypse is a horror comedy about a teenager who faces down a zombie apocalypse with a little help from her friends.

Anna Shepherd is a straight-A student with a lot going on under the surface: she’s struggling with her mom’s death, total friend drama, and the fallout from wasting her time on a very attractive boy. She’s looking forward to skipping town after graduation―but then a zombie apocalypse majorly disrupts the holidays season. It’s going to be very hard to graduate high school without a brain.

To save the day, Anna, her friends, and her frenemies will have to journey straight to the heart of one of the most dangerous places ever known, a place famous for its horror, terror, and pain…high school.

With such an introduction, it makes it difficult not to look it up, then pick it up.

I might’ve read that book almost a year ago, but I still vividly remember the book, the story, the action. Perhaps the fact that the book is based on a musical movie (and not the reverse) helped for the character depictions. However, since I didn’t watch the movie (I can’t find it on any Canadian streaming platform I will remedy that this afternoon, as it has appeared on Netflix Canada!), I doubt it.

No. The truth is that Katharine Turner and Barry Waldo did a fabulous job in making this story extremely lively as well as funny, witty, frightening… and also emotional, thus proving that not having seen the movie is absolutely no impediment to enjoying the book.

However, I admit that if I’d had seen the musical, I would’ve had the exact images of the characters and places. Then again, the descriptions provided in the book are so complete that it is not necessary to have seen it before delving into the book.

Without spoiling anything, I remember that scene in the shop with all the Christmas characters, or the one at the end, or or or. In fact, writing about it now makes me realise that I remember all the images the book brought me while I was reading it. Yes, despite having read over a hundred books since.

If that isn’t testimony of how good the book is, I don’t know what is.

A totally entertaining book, which you can read within a couple of hours!

For this non-YA reader to love a book that much takes wonderful writers, and Turner and Waldo are exactly that. I now only need to find and watch the movie because I’m curious about it!