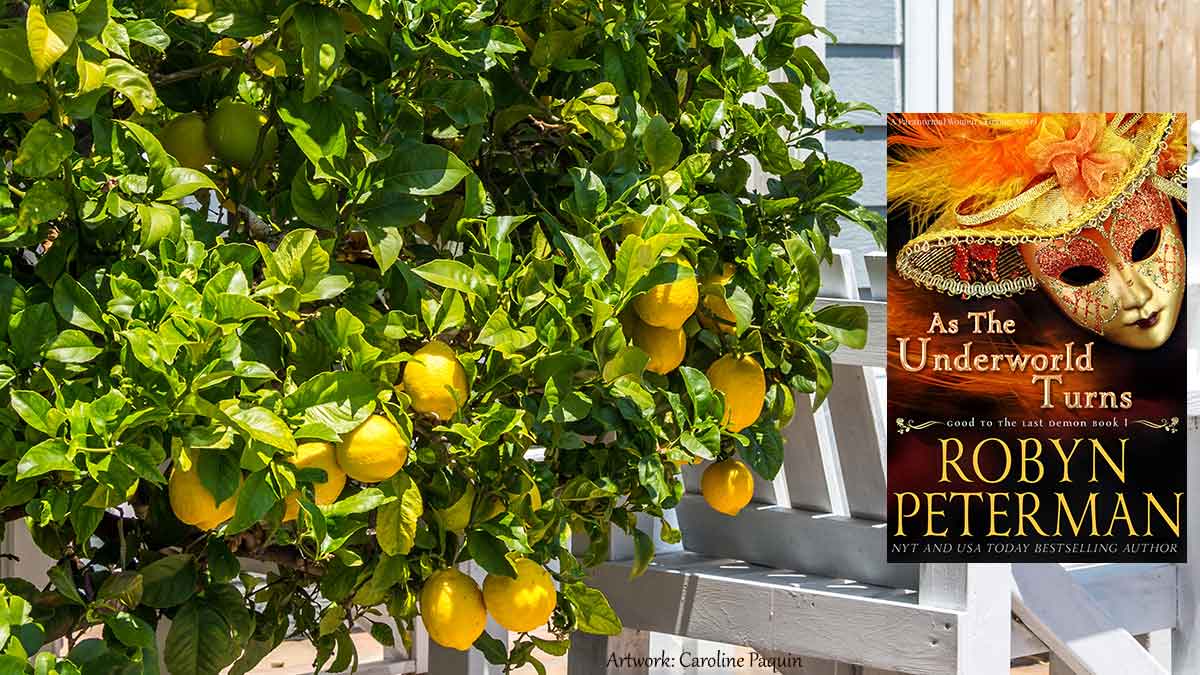 The following review is part of my being in the author’s review team, which ensures that you can read it before the book comes out (or on release day).

I wanted to catch up on belated reviews. However, with an ARC to read ASAP, I couldn’t do much of it, especially with many house chores thrown in-between pages. My apologies for that part. Then again, review I am writing, starting with Robyn Peterman’s brand-new book baby, the first of her new series, to boot!

As the Underworld Turns

What does a forty-year-old former child star do when she finds out she’s a Demon?

A sitcom, of course.

Age is just a number unless you’re an actress of a certain age trying to make a comeback in La La Land. Back in the day, I was the child star of the hit show Camp Bites. Today, I’m still living it down.

After a disastrous soap opera audition and getting fired from a TV show for not having a bodacious enough backside, one would think I’d be smart enough to go into real estate.

Just found out from the rudest, meanest, and hottest guy alive that I’m a Demon. The jerk, also a Demon, goes by the name Abaddon—Abe to his friends.

I call him Dick.

He’s come from the Underworld to protect me—insert laugh track—since there’s a bounty on my head. Dick is not a welcome addition to my midlife madness. However, he won’t go away, and now, he’s my new boss.

Fine. Whatever. All I ever wanted to do in my life was pretend. I can pretend to get along with Dick. I can pretend that I’m not wildly attracted to him. Not sure I can pretend I’m human anymore, or that a supernatural assassin isn’t trying to cancel me, but I’m going to fake it until I make it. Or I get killed.

As the Underworld turns upside down, so have the days of my life.

This new book starts with a bang and a rather troublesome audition for Cecily Bloom, a 40-year-old actress now in competition for roles with girls (literally) half her age for parts closer to her own.

Sadly, no matter how hilarious that part of the book is (and it is), this is the reality of today’s entertainment world and Robyn Peterman, through Cecily’s eyes, nails it on the head. After all, she is a former actress, her husband is still in the business and, thus, she knows from experience what she is writing about.

It doesn’t make me feel less for Cecily, even though I admit that I laughed my head off, which is the author’s trademark: no matter how dire, you will always end up laughing to near weeing your pants.

However, the fun had only started and Cecily gets offered the chance of a lifetime: having her own sitcom, with complete control, unlimited budget… and a caveat: she has to deal with someone who tells her that she is a Demon and who tails her every step (or almost), with a great combo of snark, attitude, and douchebaggery.

Abaddon, aka Dick for Cecily. And gosh, does she hate his guts!

As the Underworld Turns is a brand-new series, with a brand-new set of characters. However, it is a spinoff of the Good to the Last Death series (still ongoing), which means that those of us who read the author’s first PWF books will be familiar with “Dick”, whom we had the chance to meet in The Facts of Midlife (of which you can read my review here).

In my case, I confess, I fell head over heels in bookish love with the Destroyer. What’s there not to love? He is extremely snarky, a complete badass, and irreverent to a fault, qualities that are only seen more in this new series, of which he is the main male protagonist.

Hours of pleasure for any reader!

Who says new series says new characters, and what characters they are, starting with Cecily, an heroine after my own heart, one who tries her darnedest not to give any crap to things (with various results), one close to my own age, and who tries to navigate through her newfound “Demonishness” with many moments to make us laugh our silly heads off.

Cecily’s mum might have left her and her father when she was a mere newborn, she was and still is well surrounded by a loving family: her father, Bill/Billy/BJ/Man-mom, a painter of, at times, odd ideas (like cockroaches); her brother, Sean, a former child actor himself with a serious penchant for special gummies and a flair for the stock market; and Uncle Joe, a deceased nudist who loves to dance and has a talent for unknowingly embarrassing his niece. Confession: I love Man-mom and Sean, but Uncle Joe is my favourite. He’s all sorts of funny and is quite wise, too. I would also love to play the quotes game with them!

Talking about hilarious to no end: Beyonce/Britney/Mariah/Cher/etc., Cecily’s agent, a woman in her 60s with an obsessive love of lip pencil and absolutely no filter, even when it comes to talking about orgasming (to Cecily’s utter embarrassment).

Finally, there is Jenni, a now terrific makeup and hair professional who had started alongside Cecily and Sean in their defunct show, a long time ago.

All in all, a great new cast of characters! And for those who read the Good to the Last Death books, there might be some special appearances by a few beloved characters.

I talk a lot about the laughs, but the family feeling is also something that had me completely hooked to the first Good to the Last Demon book.

And Abaddon, of course!

As the Underworld Turns is also very gripping, from the first page to the… cliffhanger, which only makes me anticipate The Edge of Evil, the second book in the series set to be released in December, with near bated breath.

Overall, cliffhanger or not, this book is more than worthy of

A full cast of five stars!