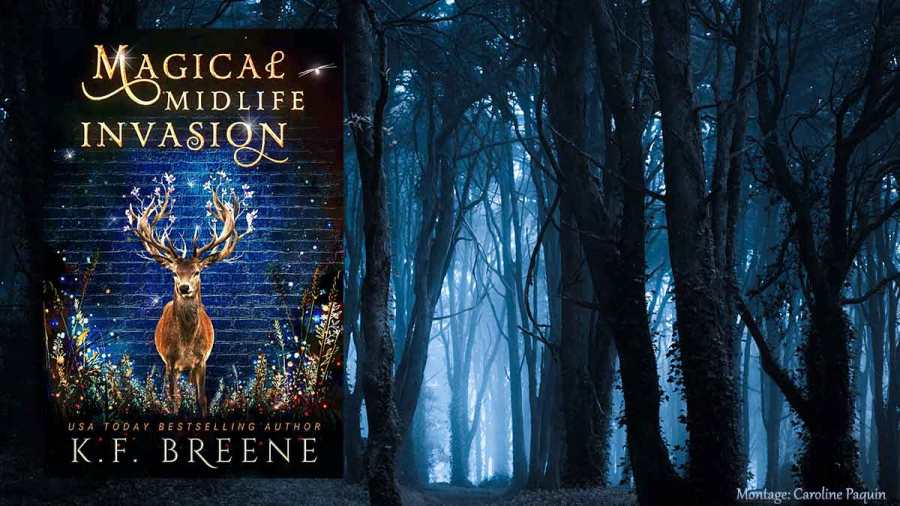 Again, don’t be fooled by the lateness of my review. With the virtual PTMs (parent-teacher meetings), I had my work doubled last week, which means that it did take me a whole five days to read K.F. Breene’s latest, and it seriously was because I lacked time. At night, I was so knackered that I opted for a before-sleep reread because I knew I wouldn’t be able to enjoy the book as much as it deserved in my state of exhaustion.

It was the best decision.

Because Queen Breene knocked it out of the park again with her third Leveling Up book, Magical Midlife Invasion, which came out last week. Reading it with half my concentration would never have done justice to this paranormal romance, which is the latest instalment of what quickly became one of my favourite series.

Magical Midlife Invasion picks up a few weeks after Jessie and her team once again bested a team of Elliot Graves’ minions, and after Austin Steele finally took his official place into her team. And after the trying to date fiasco, of course.

This time, Ivy House’s chosen faces a double invasion: her parents visiting and a couple of mysterious magical prowlers. It is to wonder which will be the toughest: her mother’s constant fighting with Mr. Tom or the prowlers (and Edgar’s flowers being munched).

One thing that struck me when reading Magical Midlife Invasion is that the book had a perfect balance between laughs (fart blanket, anyone?), action, and romance, interspersed with Jessie’s continued learning of her powers, as well as Austin, who also, at long last, accepted his alpha role, now trying to build his pack and take his place in the town’s economic development.

From Pete and Martha being, to our great enjoyment, the epitome of the rednecks that they are, to Pete’s begonias and fart blanket, to Martha’s potato throwing, to Mr. Tom’s constant intrusion into Jessie’s private life (including during THE perfect date), it is impossible to count the moments I had to stop reading from laughing too hard. And that is without forgetting Ivy House’s antics and the first time that rather than scaring the bejesus out of me, the dolls actually made me laugh. Hard.

Then again, there were also many, many sweet and at times hot moments between Jessie and Austin, which left me (and many other readers) with a massive case of the reader’s blue balls. Because K.F. Breene earned herself the Queen nickname for her amazing books, but she is the queen of many things, including that of the slow burn. Hopefully Magical Midlife Love, the fourth book of the series (which will come out in February), will serve us the fireworks we’ve been waiting and hoping for ever since the two characters met.

Regarding that, I like the fact that, as Jessie points out, she and Austin have the reverse of a conventional straight male-female friendship, insofar as instead of one of them refraining from acting on growing feelings for the other because of the “friend zone”, they both have to refrain from their growing attraction and feelings for each other so as to keep their friendship. In fact, both of them, in their own way, have their own demons to deal with, and past experiences to forget or, at least, overcome, in order to, hopefully, make things grow between them. Because when observed by an outsider (i.e. the reader), it is more and more obvious that they are meant for each other, both drawing the best in the other and having them being their best self.

As for the action, the last part of the book is packed with it, including a battle royale on two fronts of Ivy House, which again shows the wonder that is the Basajaun in action, among other things.

Characters we can’t get enough of

I mentioned Jessie and Austin, the two main characters, but all of Breene’s characters are among those that we can’t get enough of, be it for their constant banter (the geriatric trio of Mr. Tom, Niamh, and Edgar), but also the new additions.

To say that I love Ulric is an understatement, for I completely adore the (literally) colourful gargoyle, who made me cry of genuine emotion at some point, making me want to hug him pretty badly. As for Jasper, his quiet personality is a nice contrast with the others, and I can’t wait to see more of him.

The only missing person in the book? Sasquatch! I missed him so much, but I was really happy to hear that we will see more of him in the coming books. A part of me would love to see him interact with the Basajaun. That could be quite funny!

I honestly don’t know how I will manage to wait until February to know what happens to Ivy House and its motley crew of misfits. I love this series so, so much and this book simply confirmed Leveling Up‘s status as one of my favourite series.

Five stars and then some! ✰✰✰✰✰