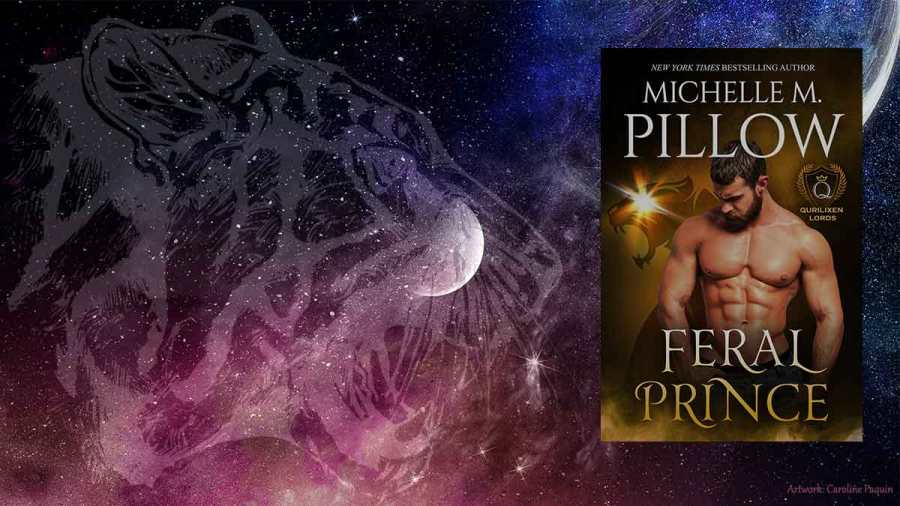 First of all, I would like to apologise for not having written much, if at all, over the last few weeks. I simply decided to take a little vacation, except for a couple of ARC reviews (commitments and all), and this one is a bit late, because the last week has been ARC crazy, much to my pleasure, as all the books I’ve read were fantastic!

Which brings me to Feral Prince, my first review as part of Michelle M. Pillow’s review team. Worry not, my “official” reviews (i.e. Goodreads and vendors) were on time. The reason this one was a little late is because it was a complicated end of week and weekend, for me, following a little accident (PSA: be seriously cautious when using a mandoline, and cleaning it after use!), which made me unable to properly type since the middle of the week.

It does not mean that I didn’t read, or that I read slower. Geez! Feral Prince was so good that I devoured it in a little over a day! So to say that I missed Qurilixen is a huge understatement. I love this planet and its various series so, so much! Michelle M. Pillow created a whole world so full of possibilities that it is impossible not to fall head over heels in love with everyone involved (except the bad guys, obviously). And in Feral Prince‘s case, as with the rest of the Qurilixen Lords series, it is great to see, again, the children of characters I know and love. However, remember that each and every one of her books can be read as a standalone. The only thing a new reader will miss are the inside jokes, because even past books from a same series are revisited, so nobody misses out on the essential.

My review of the first two Qurilixen Lords books

Prince Roderic hates the diplomacy demanded of his position as a cat-shifter royal. As the son of a diplomat, he’s all too familiar with the treaty surrounding the Federation military occupation, Shelter City. The shifters can’t simply ask them to leave, or they’d risk retaliation. Discretion is the key, which includes not getting caught mingling with those under Federation protection. So crossing paths with the beautiful Justina is a mistake waiting to happen. She’s frustrating and rash and doesn’t mind drawing attention to herself. But, as fate would have it, she’s also the one woman he wants to call his own.

For decades they have dealt with lies and deceit, but when the humanoid population under the Federation’s control begins hunting shifters out of desperation, Roderic knows things have gone too far. It’s time to drive the Federation off his planet once and for all, even if that means losing his one chance at true love.

What’s a year when it’s so good?

One year is the time that elapsed between Marked Prince and Feral Prince, something highly unusual with Michelle M. Pillow, whose releases are much less distanced from one another, and who has gotten us readers used to several new releases a year, oftentimes from various series.

However, the last year and a half has been hectic and, at times, difficult, for a lot of people, and Michelle is no different. At some point, it does get to become too much, and a break is needed in order to reset one’s brain. Heck, I just did that, too, when I had a lot of time on my hands after a difficult school year (I said it before: because of the circumstances; it was, honestly, the best class I’ve had in my whole career), and I spent much of my summer doing a lot of things and reading less than I had planned so I could… reset my brain! So I will not be the one to throw stones at anyone who does the same, especially not an author who has become a friend.

Was the long hiatus worth it for Michelle? Oh, yes!

Reading Feral Prince and not wishing to stop myself (although I did because I had to do things like eat and sleep – silly being a human, eh!) is proof in itself. Because the book was so good that a whole year to wait for it is preposterous at that point. Moreover, if anyone complains about a prolific indie author taking a break and making their readers wait a year for a new book, I will say this: your favourite authors with big publishing houses often make you wait even longer for the next book in a series. You know: perspective.

So what’s a year when a book is that good? Hm… Nothing, really.

Feral Prince is the story of Var prince Roderic, son of Prince Quinn and Princess Tori, whose story you can read in The Playful Prince. One “night” (Qurilixen has only one night of full darkness per year), while sleeping in the forest, the cougar shifter falls upon Justina, a Cysgodian woman who lives in Shelter City, but was very far out of the approved boundaries, and with a passed out and bleeding Princess Fiora, no less! Leaving Prince Jaxx’s wife in Roderic’s care, Justina rushes to make it back home before the drones get to do their heat count. However, despite having a lot to worry about, since Fiora is unable to feel her husband through their bond, Roderic can’t stop thinking about Justina.

And there starts the fun, with a race against the corrupted Federation, who wants to get their hands on the shifter’s planet, one way or another, and uses the Cysgodians of Shelter City in order to do so. For should the shifters enter Shelter City, and get caught, there will be hell to pay and a bloody war on their hands. Little does the Federation know that the young Var and Draig princes and princesses enter Shelter City in order to find a way to provide them with the food they have been all but denied by the controlling Federation.

From the insides of Shelter City to the Federation’s building, Roderic follows Justina and finds out that she is sick, and does all he can to bring her to the Var palace so that she can get cured, and examined by his mother, a scientific, thus triggering a conflict that has been simmering for decades on Qurilixen.

With the prince trying to control his growing feelings for the Cysgodian woman, there is much at stake for all involved, which makes the book nearly impossible to close, especially because of all the action strewn across the pages, and including a lot of heat between the two heroes.

It might have taken a year for Feral Prince to be published, but it was very much worth the wait. Satisfying from start to finish!