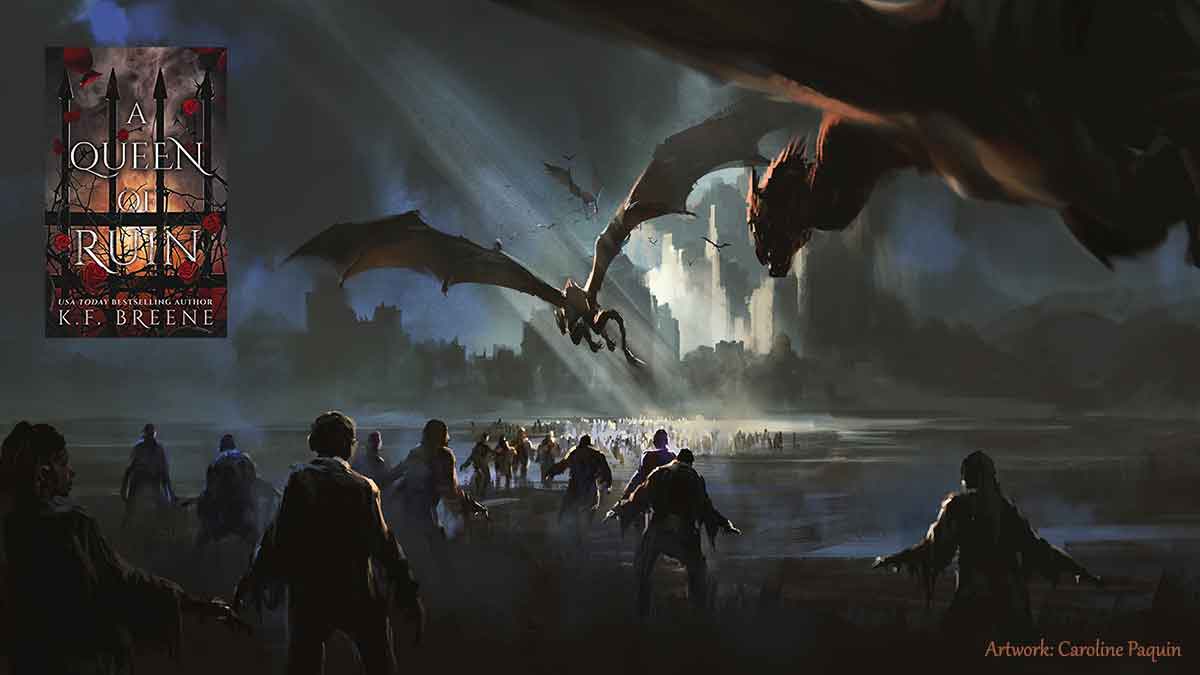 The following review is part of my being in the author’s review team, which ensures that you can read it before the book comes out.

When came the time to write this Deliciously Dark Fairy Tales finale, K.F. Breene juggled with the idea of making the series longer, because the characters still had quite a bit to say and do. In the end, she settled for a compromise: keeping the intended four books, but making the last one much longer than her usual. Consequently, A Queen of Ruin is quite the brick! Not that I or anyone is complaining, and I will spoiler freely explain why, of course.

Again, this review comes with warnings:

My review of A Ruin of Roses

My review of A Throne of Ruin

My review of A Kingdom of Ruin

That’s it for the warnings. If you’re OK with both, then you’re good to go for this review and the book.

A Queen of Ruin

The conclusion to Finley and Nyfain’s story.

I thought, once we released the curse, I’d only have one enemy to contend with.

The queen lives. Not only that, but she knowingly hid herself from me and the rest of this kingdom until the moment the curse was broken. Now she is back, and her desires aren’t clear. Neither are her motives.

Will she try to take the throne for herself?

We can stop her…unless she had a hand in that curse. In which case, will we need to battle her and the demon king before we can finally live in peace? Or has this all been for naught?

Regardless, we have very little time before the demon king returns to wipe us out.

A story in three parts

Considering that A Queen of Ruin is a good novel length longer than the previous book (and longer than anything written by K.F. Breene to this date), the story has been separated in three parts, which don’t have titles, but which I can summarise thusly, without spoiling anything:

With Finley back from the Demon Kingdom, alongside many of the disappeared shifters, and mated to Nyfain at last, we could’ve thought that this would be the end of their worries, except for getting rid of Dolion.

Thinking so, however, is not knowing Breene, who is one of the experts at throwing a wrench in her characters’ plans like a boss!

Because at the end of A Kingdom of Ruin, we found out that the Queen did not die before the Demon King’s curse came to be. But how did that happen? What is her end goal? Why did she never contact her son?

All these questions, and more, will get their answers throughout the book, especially through the first part.

The second part revolves around finding an important cure, and put Finley’s healing skills to the test, once more. Thankfully, she had a lot of support in order to find inspiration and ideas for making this vital cure.

As for the final part, the title I gave it speaks for itself: it is the final showdown between Wyvern and the Dragon King, one which will decide everyone’s fate.

Being emotional is who I am, I’m afraid, but one thing is for sure: I will not be the only one to end up ugly crying at the end of a certain part of the book (to the point where I did tell the author that if I didn’t know her better, I would have made her very sorry).

But that is not the only emotion that the reader will feel when reading this series finale. There will be a lot of laughs, especially with the epithets that Hadriel can come up with, or with a certain blazer made by Cecil the cracked (but immensely talented) tailor, and many other hilarious moments.

Furthermore, if you think that the previous three books were hot and could not get any hotter, then you’re in for the need of a brand new fan (or several), maybe more batteries in your BOB or a good hand or a lot of time in bed with your special someone. That’s how hot this last book can be at times.

However, I admit that, for the first time in this series, there was a scene that made me think that Breene had gone too far. Remember: I am anything BUT a pearl-clutcher! So if I think that, it is because the scene did bother me more than normal. Much more. But it all serves a purpose, so I let it slide.

Queen of the Battle Scenes

Readers calling K.F. Breene “Queen Breene” is a long-time inside. Sometimes referred to as Queen of Mischief, other times as Queen of Fuckers, and a few more of that ilk, there is one that had never been mentioned before, and one that really embodies most of her series:

K.F. Breene is the Queen of the Battle Scenes!

Seriously, be it in Darkness, in Demigods of San Francisco or, more recently, in her Demon Days, Vampire Nights World series, her battle scenes are page-turners in their own worth.

A Queen of Ruin brings this talent of hers up many more notches, if it is possible, and had me alternately screaming, cheering, laughing, crying and, all in all, going even crazier than usual.

That’s how good the battle scenes were!

I have two favourite characters in the series: Hadriel and Hannon. I wrote a lot about the former, but it is the latter who deserves my thoughts for this one and I love him more for it, if such a thing is possible. His steadfastness, his profound love for his family, and his heart bigger than the world make him one of my favourite book boyfriends. Plus, I love me a ginger!

As for Hadriel, am I wrong in shipping him and Vemar? Add all the moments when he turned emotional and made me emotional alongside him, and he is definitely someone I would love to have as a forever friend. And his quips are, as always, right on point. Tell it to the cumgoblin!

Am I sad that the series is over? Yes!!! However, I ended up closing the book happy, following the best closing sentence I have ever read. And that is saying a lot when we consider how many books I have read in my life.

This series finale is good from the first word to the last, and very worthy of