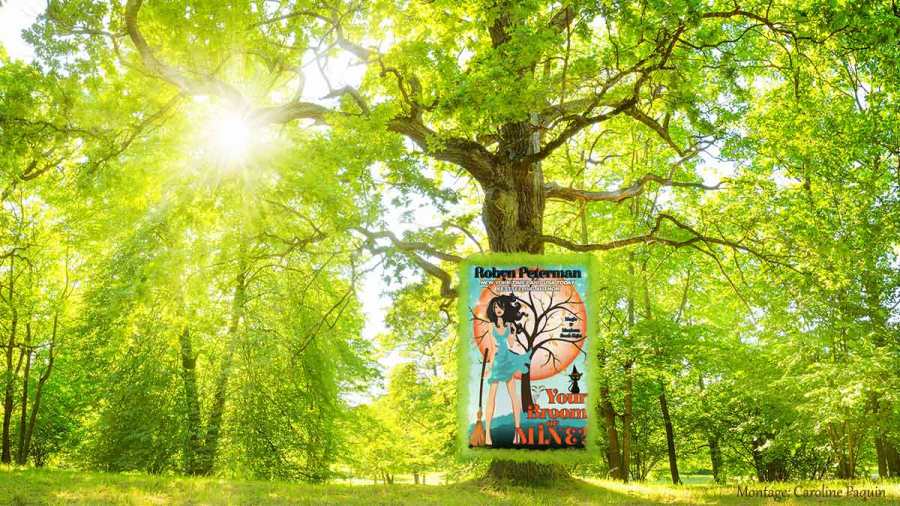 The following review is part of my being in the author’s review team, which ensures that you can read it the moment the book comes out.

Who needs balls when she has lady bits? Such is the question that Willow asks herself at some point in Robyn Peterman’s latest Magic & Mayhem novel, Your Broom or Mine?, which comes out on the 14th of September at all vendors.

For after spending a month inside a tree following a near-death attack in the previous book, Willow (literally) comes out of the woods, in search of her balls and wanting to forget Zach, the warlock she has been in love with for a decade (and Zelda’s twin brother).

Little does she know that Zach has spent the whole month at Sponge Bob’s roots, watching over her, and would not have eaten nor slept had it not been for his and Willow’s BFF, Zorro, the gay fainting goat shifter (of the assless chaps).

As she emerges, the young dryad has to help Zach, but also the whole of Assjacket, West Virginia, against a new menace which came in the person (?) of Mae Blockinschlockinberg, who is intent on destroying the whole town’s community theatre… and someone else, for her own nefarious purposes.

Yes, I have taken to speaking Puntreelish in honour of Willow and all the trees. More seriously, those tree jokes and puns had me laughing so hard at times that I ended up snort-laughing in a packed metro, giggling on the bus, and, overall, not respecting my own word of never reading anything by Robyn Peterman in public. Oh, well. It was worth it.

From Willow’s and Zach’s beautiful love story (after all, it is a RomCom!) to Zach learning to love himself (and to accept his Fabio-dad), to the stinky vile and horrible Mae Blockinschlockinberg, to the amazingly fabulous Zorro, to the characters we’ve known and loved for the last seven books (witches, shifters, and cats alike), Your Broom or Mine? was a roller coaster of emotion, suspense, and hilari-tree!

Characters we know and love, and some we simply despise

I have to agree with Willow: “Black socks and sandals [are] a fashion crime that warranted imprisonment.” For that’s what Mae Blockinschlockinberg and her posse are wearing, much to everyone in Assjacket’s disgust!

And that’s not counting the horrible woman’s (?) total disrespect of Bob the beaver shifter’s passion when she published his script online, then gave it bad reviews and had it pulled down because she didn’t like its grammar, a story that will sound familiar to anyone who knows authors… and will make them seethe. The Goddess knows that seething I did, on behalf of the poor unibrow-endowed Bob.

There is also Sassy, who is still compensating for her several screws loose by thinking that she speaks many languages when she, in fact, only improves her English… “Sometimes, my excrement knowledge of language makes me feel like I’m almost smart.” Yes, that’s another moment when I snort-laughed a little too loudly! “It’s hard to be as promiscuous as” Sassy is when it comes to languages and making us laugh until our stomach hurts! However, it’s hard to fault her when she has such a heart of gold!

Talking about heart of gold, I wouldn’t be nice if I did not mention Zorro, the best discovery of the previous book, Switching Witches, who is adored by everyone wherever he goes, and who has become revered by everyone in Assjacket. In fact, when Willow says,

it really does make me feel that way and seriously lament the fact that the fainting goat shifter is a book character and not a flesh and blood person. I’m praying the Goddess that he will have his own book at some point. Because he is the BFF we all want to have. Maybe making him meet Dwayne from the Shift Happens series? That would be all sorts of fabu, especially if there are assless chaps and pole dancing involved!

A story with a moral

Yes, there is a moral to the story in this book. Without giving anything away (I’m anti-spoiler!), I will only say that maybe bad and evil multiplies, but Karma will always end up paying them a visit.

It does give one hope about the future!

Looking much forward to her upcoming novella featuring Fat Bastard, Boba Fett, and Jango Fett, the most hilarious fat cats!