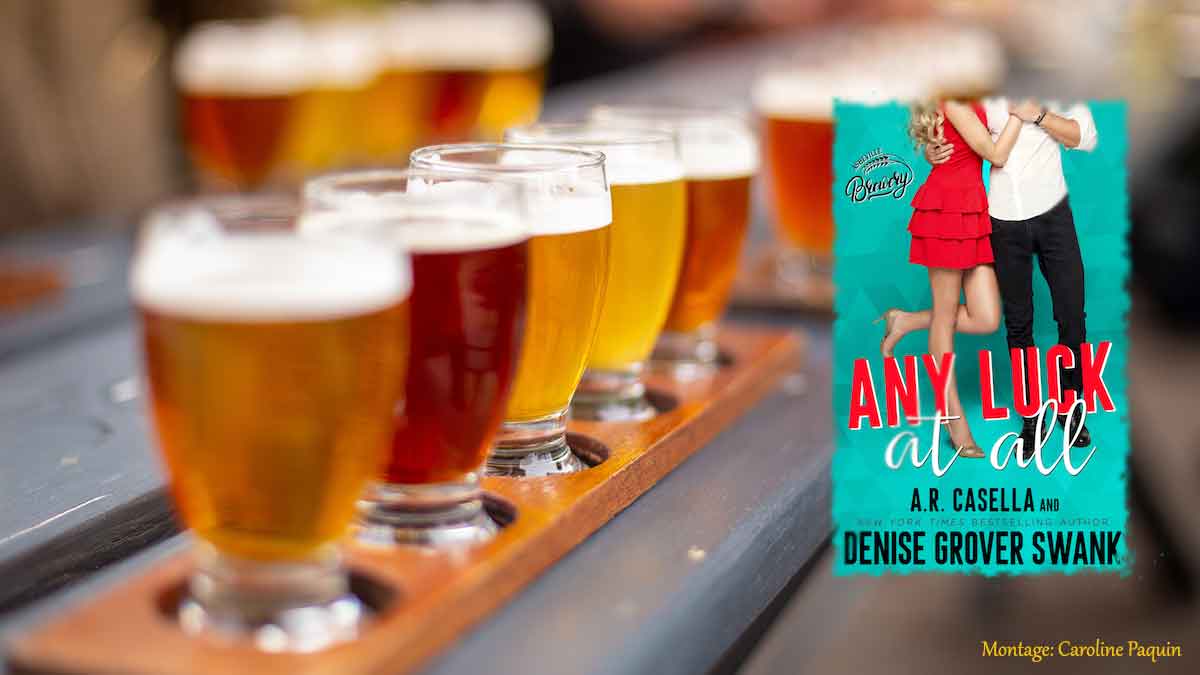 You only get one chance to make a good first impression. This saying is usually applied to people, but can also be applied to books, especially the first of a series. The first book, and how it is received by the readers, will make it or break it. It was the challenge that awaited Any Luck At All, the first of the Asheville Brewing series, co-written by A.R. Casella and Denise Grover Swank.

Did they pass the first impression challenge? Exceedingly well. If, for Denise Grover Swank, this is not a first-time experience (far from it!), for A.R. Casella, it is a very first novel on top of the first of a series. Co-writing it with an established author like Denise was, possibly, the best way to break the ice, and what better setting than a falling down brewery and a beautiful love-at-first-sight story to do so?

For Any Luck At All starts at the reading of Beau Buchanan’s will, and all the chaos and (yes) hilarity that follows. For the late patriarch of the Buchanan family was a brewer, and he had decided, at the last minute, to change his will, leaving his beloved brewery to his grandchildren, and nothing to his son. Although the son part was, from the beginning, intended.

The problem is that Buchanan Brewery is going under and has not had anything new to offer for years. For Beau’s grandchildren, the choice was to keep the brewery and improve it, or to sell it and keep the proceeds of its sale.

A businesswoman who recently sold her company, Georgie Buchanan saw in her estranged grandfather’s legacy a whole new challenge, which she would love to undertake, despite the reluctance of two of her siblings, Lee and Adalia, but with the encouragement of her newfound half-brother, Jack.

Things get complicated for Georgie when she meets River Reeves, a master brewer trained by her grandfather, who recently quit his job when his associate decided to sell their company to “the devil” (i.e. a big company), without telling River about it in the first place.

The problem was not River or the job she offers him, but the man himself, whom she is quickly falling for, and who is also falling irretrievably for her.

What will win: the heart or the business head?

Any Luck At All is a completely heartwarming romance that hits all the right buttons and may also hit you completely in the feels. It is only normal when you read both Georgie’s and River’s backstories, making you relate to both of them in a powerful way.

However, it is a little predictable, especially when this book is not your first romance. You know what will happen, although you don’t know when. Credit to Casella and Swank for surprising us with those “when”, and leaving us with a few mysteries of their own which, I admit, I can’t wait to see uncovered.

Not how how, insofar that it is a romance and it would not have done not to have Georgie and River ending up together, but the how it happened, which made me howl with laughter. And may no one ask me to take part in a séance, like ever! (That scene will kill you laughing.)

Yes, it is a “predictable” romance, but a very heartwarming one, with beautiful and great characters to whom it is easy to relate: flawed, caring, and extremely human. And there is a puppy, too, which made me smile and smile some more because who doesn’t love a cute puppy?

All in all, it was a very good read, and I can’t wait to read Addy’s and Finn’s story, Better Luck Next Time, which is set to come out in November. Finn has a lot to atone for…